History and Concept Behind the Luxury Train - Palace on Wheels

In the medieval times, the royalties used to dwell in the castles, forts and palaces all around the globe using the regal comforts and privileges. They used to seek ethereal pleasures using the in house amenities of their magnificent palaces.

Simultaneously, while they used to move outside the palaces their scepter used to sway and they used to use the best transportation available. This was the case in the Asian subcontinent and Europe as a whole. This happened in India also where hundreds of maharajas, Nawabs and others effluent people with much power and pelf built palaces and hawelies and used the best carriages, car, railways and air charters. Many of them dreamt of making their Palace on Wheels in those times almost 2 centuries back and this led them to plan for their private railways. Among such pioneers Nizam of Hyderabad and some other princely states excelled.

The Idea of the Palace on Wheels Luxury Train

The idea flashed into the minds of the planners to provide the sheer luxuries of a palace on the moving coach. Thus for this sake the train was conceptualized to throw a red carpet before the guests and impart them the noble experience of a royal host. Under this theme the carriages were selected which in the bye gone era served as the royal saloons of various princely states and the Viceroy of India.

Thus Rajasthan Tourism Development Corporation in league with the Indian Railways moved ahead with the planning of the first luxury and heritage train of India which with the passage of time attained much fame among the tourists and gained universal applauds and appraisals. Now this is considered as the World's 4 the most luxury train. 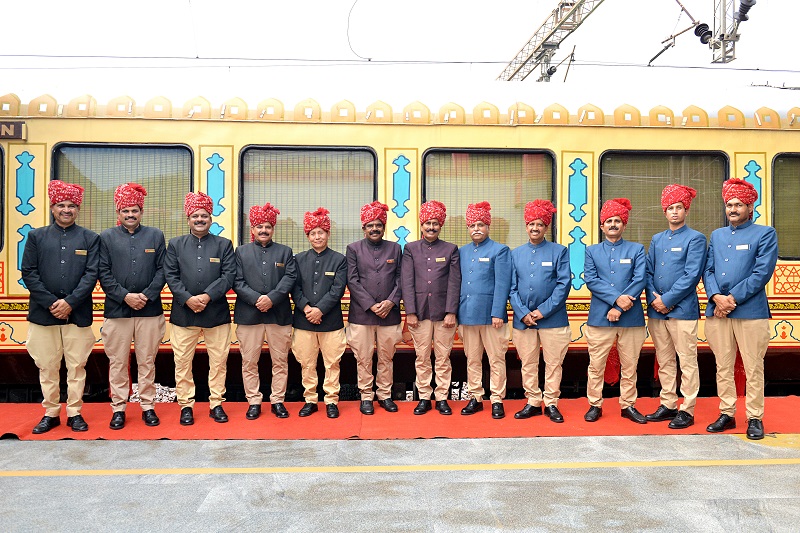 The History of the Palace on Wheels

The history of this luxury train dates back to the later half of the 20th century when it was devised to star a luxury train by using the old royal carriages of the princely states or to make some by reforming them on the heritage theme and thus promote the tourism of Rajasthan and India as a whole.

After the independence of India all the privately-owned railways of the erstwhile rulers became a part of the Indian Railways. The whole infrastructure including railway lines, carriages railway station etc. became a property of the Indian republic.

As many of the saloons use by the royal families were so much decorated with the traditional paintings and opulent furnishings, it was not viable to induct them in the fleet of the Indian Railways and use them as normal passenger coaches. Thus with the idea of providing awesome and momentous travel experience, the Palace on Wheels was launched and it made it's maiden journey on 26th January 1982.

Since that very time this luxury train made a legacy traversing through the plains, mounds, rich and fertile land and providing an awesome spectacle of the rich and vivid heritage of Rajasthan.

Can Nizam Saloon be Called as the Precursor to the Palace on Wheels?

Those who dream of the Nizam life and aura, may be mesmerized by the view of the railway saloon car of the Nizam in which he used to travel with his family. This is made of wooden body set on four wheels. Built in 1886 it is equipped with all the modern comforts which the present luxury trains in India like the Palace on Wheels or the Maharajas' Express trains boast of. It has the privileges of the bed rooms, kitchen, bath room, dining hall. The gorgeous kitchen of the saloon catered to the needs of wide-ranging palatial dishes.

How did Nizam Railway help in the Development of Indian Railways?

It is a surprising fact to those who consider that only the British government was responsible for all railway development in the era of pre independence in India. The reality is that even various princely states can equally be credited like the states of Hyderabad, Jodhpur, Baroda etc. The seventh Nizam of Hyderabad named Osman Ali Khan can aptly be considered as the architect of present Hyderabad as he created many landmarks and envisaged the modern Deccan Railways Secundrabad and Kacheguda railway stations were erected during his life time.

He ordered for the massive projects of laying of railhead, thus railway lines for the long distances were built in that time which Criss cross south and paved way for better connectivity of remote parts of Andhra Pradesh to Hyderabad and Chennai.

This is first South Indian railway company popularly known as Nizam's Guaranteed State Railway(NGSR). This company was initiated in the ear of Nizam and kept on working from 1870 to 1950. Later, on this came under South Central railways. To the extreme surprise NGSR laid the railway lines and operated trains, platforms and rendered other services with the remarkable engineering feat of that times.

This company worked on first PPP model which is now a days attaining much momentum in India. The company first of all made ammeter gauge line by using the funds raised by the issue of the redeemable mortgage debenture.

The ancestors of the last Nizam initiated the railways in 1879 and it operated trains from Wadi to Barangal and Bezwada ( vijaywada) to Madras and thus covered more than 300 miles distance. In 1874, Secundrabad railway station was built to link Nizam state to the rest of prominent princely states of India. In the year 1916 Kacheguda railway station was constructed.

This workshop has a legacy of of nearly one and half century when it was opened in 1893 under the aegis of Nizam Guaranteed State Railways. The major task of this workshop was to repair and do periodic overhauling of the meter and broad gauge locomotives and coaches as well as royal saloons. It also used to have heritage John Morris Fire Engine which is now in Delhi. This place is also maintaining some wagons built out of wooden body.

The Saloon of Maharaja of Baroda-Another Inspiration for Luxury Trains

The royal saloon of the maharaja of Baroda might be a great source of inspiration to the design and concept of the coaches of the luxury trains in India like the Palace on Wheels, Deccan Odyssey, Maharajas' Express etc. This marvelous saloon was built in 1886 at Parel workshop by the company called Bombay Baroda and Central India railway (BB&CI). The royal family of maharaja Sayajirao 111 used it and presently it is displayed at the National Railway Museum.

You can still witness the shed made for this royal saloon which is located at Baroda railway station between platform no 7 and Pandya Bridge. This linear building once housed the living, dining and pleasure seeking bogies of the erstwhile maharaja of Baroda. The amenities in the Indian luxury trains are copied from these saloons of either Nizam's or the princely states of Baroda or those in Rajasthan.

After the first Indian Freedom Struggle of 1857 many royalties started commissioning personal railways and built luxury saloons to cater to the needs of their family transport. Like the Nizam of Hyderabad or the princely states of Rajasthan, Gaekwar of Baroda also had keen interest in the railway ventures.

GBSR was the railway line owned by the maharaja of Baroda. It was a narrow-gauge rail line. The company named BB&CI (Bombay Baroda and Central India) railway was started in 1855 to make a railway line between Bombay and Baroda. The headquarters of this company was located at Church gate Mumbai and for the meter gauge at Ajmer.

Unique Facts About The Palace on Wheels

This is the first Indian luxury train and vie with the top luxury trains of the world for it's awesome history, unique experience and amenities. The prominent interior designer Monica Khanna planned for the interiors of the coaches. Thus each saloon depicts the cultural ethos of the region by the use of crafts, paintings and other furnishings.

All the Coaches Represent Princely States

The coaches of the luxury train are named after the princely states of Rajasthan such as Alwar, Bikaner, Bundi, Bharatpur, Jaisalmer etc. Thus the interiors of the coaches are done like wisely. There are 14 coaches in the train and 82 tourists can travel together.

As you book the luxury train tickets and embark on the train journey, you get the similar kind of experience onboard as you seek while staying in the luxury heritage hotel of Rajasthan.

The journey of the Palace on Wheels gives you the privilege of indulging in the royal experiences, relishing multi regional dishes and have much fun and frolic. You enjoy "The Maharajah and The Maharani restaurants" with continental and local menu, bar, gym, library, Ayurvedic spa, lounge and other facilities on board like a king. 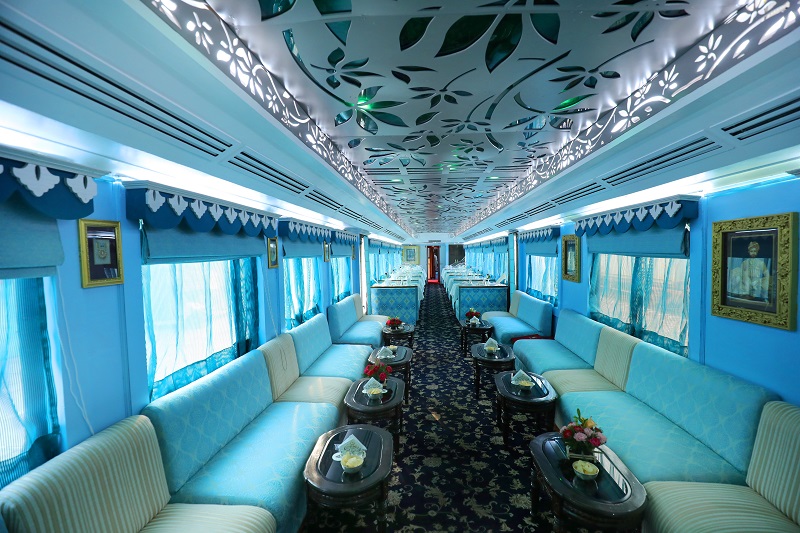 Private butlers are ready to cater to your demands all the time. During the day you can enjoy the local sightseeing tours of the places of prime interest along with the handpicked local tour guides or you can explore the optional tours and activities. At your leisure time and according to your desire you can enjoy your dream train. One can indulge in a varieties of therapies on board.

Replica Carriages in Use

It is a less known fact that originally the Integral Coach Factory used the real ceased wagons of the royalties. These old wagons were replaced with the new ceremonial carriages in the year 1991. These carriages were equipped with the top class luxury facilities and modern gadgets.

The Palace on Wheels in the New Look

After the initial start of this dream train in 1982, the train service went on swiftly for some years and later the train saw some ups and down. There was a time when it was on the verge of closure, but the fate of the train lay somewhere else. In 2009 the parent companies decided for a massive modification. Thus, the day came when on August 5, 2009 this train was again ready to chug off with a new flavor of culture, cuisine and decor.

Since 2017 the Palace On Wheels started it's journey with the new carriages having yellow color. These present coaches are more spacious and abound in luxury than the previous ones. These were revamped in 2019. 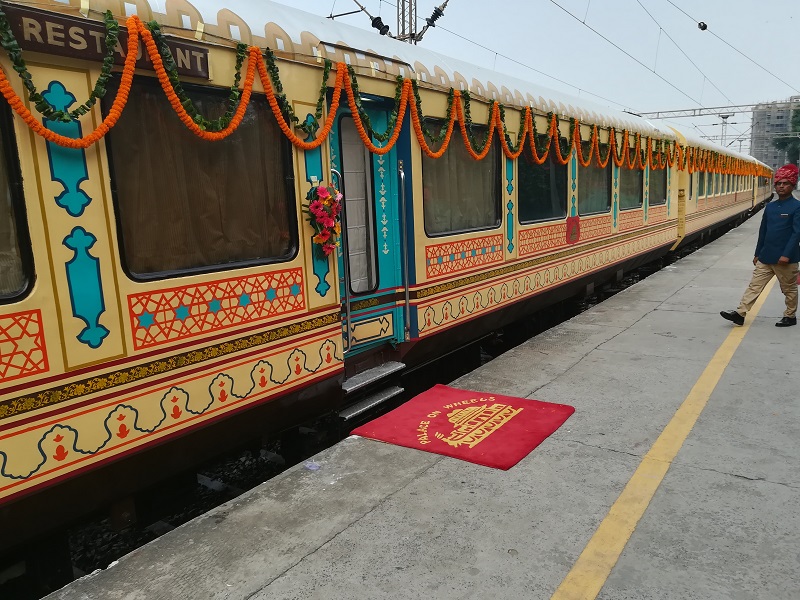 What was the Significance Jodhpur Saloon ?

This saloon was made by Sheffield & Company at Ajmer in 1930 and it was one of the first carriages of the Palace on Wheels. This saloon remained in use uptil 1991 when the modern carriages were replaced with the old ones.

How did Rajputana give Nomenclature to the Palace on Wheels?

A very important fact about the Palace on Wheels is the names of the coaches. The coaches bear the names after the princely states of Rajasthan. Even the interior designing has much resemblance to the particular art style of the states of Jaipur, Jodhpur, Bikaner, Jaisalmer and Bharatpur etc.

In 1882 Rajputana Railways made a meter gauge rail line between Manwar junction and Pali and in the later phase it was extended to Luni first and then to Jodhpur in 1885. Thus it is the first Jodhpur princely state railways. In 1889 both Bikaner and Jodhpur states constructed Jodhpur - Bikaner railine. This was later extended to Bhatinda in 1901. Thus it connected the meter gauge line of Bombay-Baroda and central India.

Biggest Railway Stations in India With Highest Number of Platforms

Best Trains from Mumbai to Goa

Best Trains from Mumbai to Bangalore

History and Concept Behind the Luxury Train - Palace on Wheels

Palace on Wheels - A Complete Guide

How to Get Around Australia By Train